Gentle giant in a hoodie, armed with skittles and soda? 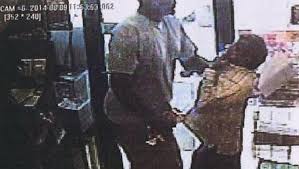 
Ferguson [Missouri] authorities have identified Darren Wilson as the police officer who shot and killed an unarmed teenager last Saturday. Documents released Friday also identify the teen, Michael Brown, as a suspect in a robbery at a convenience store a short time before the shooting.

...documents...released in response to Sunshine Law requests name Brown as a suspect in the robbery of the store. The store name and address is redacted from the documents, but it was not the QuikTrip.

Also named as a suspect in the robbery is Dorian Johnson, 22, a man who has said he was with Brown when he was shot.

The document release includes surveillance images of the robbery, showing an employee being attacked.

Opening the possibility that 'gentle giant' (according to Al Sharpton) Michael Brown had also attacked officer Wilson in an attempt to avoid being arrested.

Readers of HSIB will remember a similar playing out of facts during George Zimmerman's trial for murder in the shooting of Traybon Martin. Where the teen-ager turned out to be a vicious homophobe, who conspired with his girl friend Rachel Jeantel, via cell phone, to return from the safety of his Daddy's fiance's townhouse to the sidewalk, 70 yards away, where George Zimmerman was standing peacefully waiting for the police he'd summon to arrive. Trayvon then launched an assault on Zimmerman, knocking him to the ground, mounting him and pounding his head into concrete, before Zimmerman could access his firearm and shoot the boy in self-defense.


[The jury] they're white...they don't understand...it's just bash, bash [gestures]....Trust me, the area I live, that's not bashing. That's just called whuppass. You got your ass whupped.

[That's why I said Zimmerman could be a rapist] For every boy, every man who isn't that kind of way, see a grown man following them, would they be creep out?

That's Rachel Jeantel telling Piers Morgan, on CNN, what actually happened that night in Florida. About which confession, as far as we know, Al Sharpton has never commented.

Posted by Patrick Sullivan at 8:27 AM