Self-Awareness, thy name is not Menzie

So, Wisconsin's Menzie Chinn persists in making a fool of himself, and thinking no one will notice his intellectual sleight of hand, by producing this disingenuous graph; 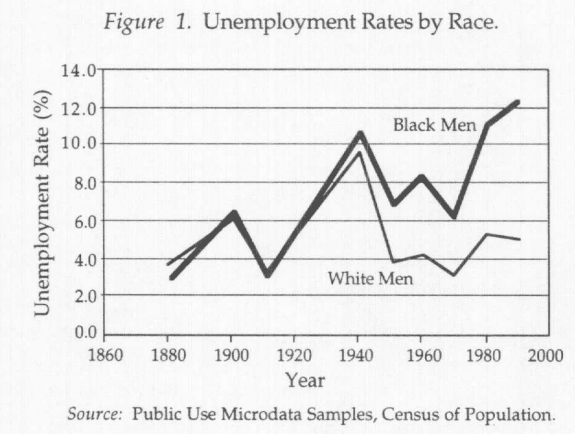 That's from a ludicrously obtuse paper by Fairlie and Sundquist (1999) titled, The Emergence, Persistence, and Recent Widening of the Racial Unemployment Gap. In which, with the fact staring them in the face that Blacks...experienced a small... decrease in unemployment between 1940 and 1950 and a substantial increase between 1950 and 1960, they put it down to Migration and adverse regional demand shifts explain the bulk of the increase in the gap during this period.

Not the obvious near doubling of the federal minimum wage in 1950. Of course, Menzie Chinn, having taken an oath to defend to the death the belief that the Laws of Supply and Demand don't apply to labor markets, forgets to mention that increase--illustrated in blue (dark for nominal, light for inflation adjusted)--that is the William of Occam prize; Black males were hindered in their employment-seeking by minimum wage hikes increases, post 1950.

We are not surprised, obviously by Professor Chinn's intellectual dishonesty. Nor, by his lack of self-awareness in also claiming; Reader Patrick R. Sullivan keeps on talking about the post-World War II boom....

Maybe, because Menzie can't keep from repeating his claim that the economy didn't boom in 1946? (Which claim he needs to keep his Keynesian bona fides.)

We'd also like to point out that we are aware of at least one economist at a top ten school--i.e., several cuts above Wisconsin--who does teach a class using vintage movies that illustrate points in economic theory. One of which, Passport to Pimlico, does an excellent job on the effects of price controls for an economy. Students of economics would learn more from that 1948 film than they ever will from reading Menzie Chinn's sophistries at Econbrowser (unless they also read the comments, that is).

[Update]: It isn't only the economists who use Hollywood's products to teach;

Posted by Patrick Sullivan at 9:40 AM