Revenge on the Cheesehead

U of Wisconsin's Menzie Chinn further embellishes his professional reputation by this;

Private Employment under Obama and Bush

Which he illustrates with (Obama = blue line, Bush = red line); 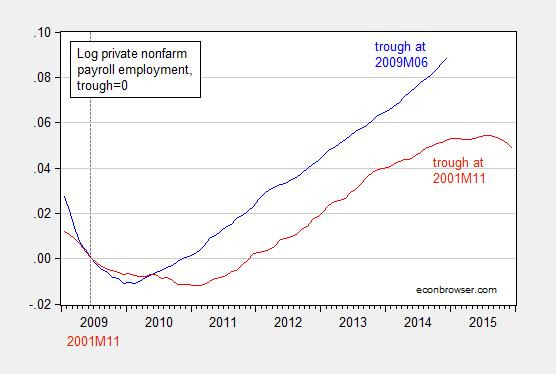 Apparently oblivious to the depth of the recession that began in December 2007. Which can be seen at this Bureau of Labor Statistics site;

With a companion table that lists the Employment to Population ratios from which the above graph is drawn. That table shows the EP at 62.9% for January 2008, but only at 59.2% this past December--i.e. after all that fabulous job creation during the Obama Administration.

Why Menzie failed to include the latter under the heading, Private Employment Under Obama and Bush, will go unexplained, we're confident.

Posted by Patrick Sullivan at 9:35 AM