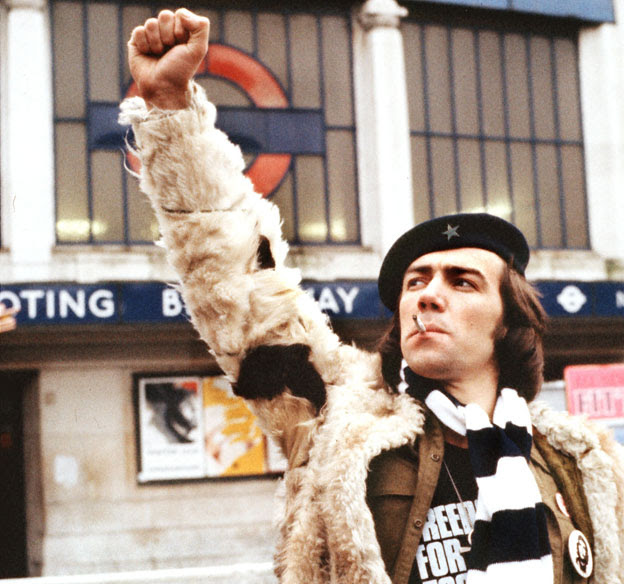 By one of the coincidences that makes life ironic, the BBC chose to post the above picture on its Democracy Day web-lebration. Which reminded us of a guy--note the Che Guevara button on the righteous lad's chest--who used to have a similarly loose definition of democracy. None other than Owen Lattimore, who was indicted for perjury for denying, under oath in front of a Senate subcommittee, that he'd ever promoted the philosophy of the Soviet Union.

Some excerpts from that noble martyr's 1945 book, The Solution in Asia;


If we are politically intelligent ....We may count on seeing, over wide areas, the partial acceptance of Marxist ideas and the adoption of one or another part of the Soviet system. [p. 24]


The Japanese, like other people, can adopt any system of society; but only if the changes made go beyond catchwords and permeate the whole society. Democracy in Japan cannot  be attained by changing the status of the emperor, but will require democratic changes throughout Japanese society.

There is in fact a democratic potential in Japanese life.... [p. 44]

Fortunately, thinks Owen (The architect of our Far Eastern policy, moi?) Lattimore, others are wiser in re Japan;


...the post-revolutionary Russians [aka, Communists], coming on the scene with fresh minds, or at least with preconceptions quite different from ours, were often right in stressing a number of phenomena whose importance we underestimated .... [p. 51]

Owen ends chapter II with; Have we any idea what course to set? Then on to chapter III, REVOLUTION AND NATIONALISM IN CHINA;

Into this complicated situation there intruded the influence of the Russian Revolution, the effects of which were felt all over Asia. We in America have never yet properly grasped the character of that influence. Wherever we see Russian influence, we still tend to look for Russian "agitators" upsetting the minds of people who would not make trouble if they were not "stirred up by troublemakers" We cannot understand either the Asia of yesterday or the Asia of today and tomorrow if we resort to such absurd simplifications. [p. 67-68]

Unlike the sophisticated Owen Lattimore, that is. The table setting goes on for several more pages, but eventually we get to dine. On page 121, we're finally hit with the situation on the ground in China as Lattimore sees it in early 1945; The political structure under the Communists is more nearly democratic than it is under the Kuomintang.

I.e., Mao is the democrat, not our ally Chiang Kai-shek. Mao is aligned with the Russians, and;

But those wise Orientals can see through that distortion;

Who had been murdering their own countrymen wholesale, but apparently that didn't count. No, Owen assures the reader that for Koreans, Mongolians, Uighurs, Uzbeks, Kazakhs, Tajiks;


To all of these peoples the Russians and the Soviet Union have a great power of attraction. In their eyes...the Soviet Union stands for strategic security, economic prosperity, technological progress, miraculous medicine, free education, equality of opportunity, and democracy: a powerful combination.

The fact that the Soviet Union also stands for democracy is not to be overlooked. It stands for democracy because it stands for all the other things. Here in America we are in the habit of taking a narrow view of foreign claimants to the status of democracy. If China, or Russia, or some other alien people does not measure up to the standards of the particular American modification of Anglo-Saxon democracy, we say that it is not democratic. [p. 139]

Btw, the reader had to take Owen's word for all this, since he didn't bother to produce any evidence that that is how Asians themselves saw Russia and Communism. And anyone who disagreed with him was just a fascist like that Joe McCarthy (who came along later to remind Owen Lattimore just what he'd been claiming back in 1945).