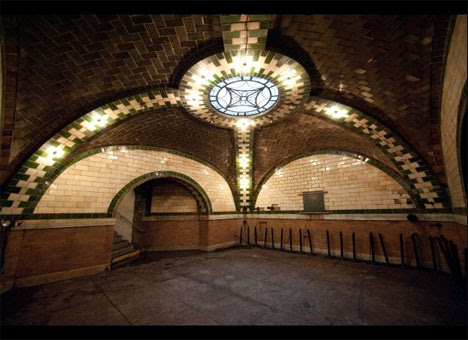 Scott Sumner has a post at Econlog today, mentioning how awful the New York City subway system is now. One of his commenters disagrees;


I almost always agree with Scott Sumner, but not this time. New York's subway system is awesome. Not perfect, but still awesome.

Which first leads one to think that 'Ricardo' doesn't get around the world's transit systems much anymore. Second, in the past New York's system truly was awesome. So awesome the stations were tourist attractions. The photograph above is from the now unused City Hall station. It was closed about the time Billy Strayhorn's signature tune of the Duke Ellington orchestra was written, encouraging us to use that A Train, to get to Harlem.

The stations were designed by the famous architect Stanford White, and included skylights and brass chandeliers, one featured a grand piano for the entertainment of the ridership. But, that was from 1904 when the financier August Belmont built the system as a business venture. After the jealous politicians in the city--who didn't understand the process by which the goose laid its golden eggs--decided to horn in on Belmont's profitable venture, everything changed.

Belmont's heirs eventually donated their share of the system to the city, rather than lose even more money in the operation of it. Of course, now that it's completely a 'public service', it's the disaster Sumner describes in his post.

But, we'll always have California Chrome running in the third jewel in the Triple Crown.

Added: HSIB has written before about Belmont and his subway.

Posted by Patrick Sullivan at 8:34 AM