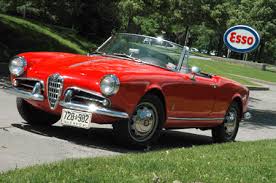 
The stand-out stars [at the New York Autoshow] - sparkling Bugattis and sleek Maseratis - were completely ignored, as packs of journalists descended on a tiny booth that could barely fit two small cars.

It was like seeing the football star and head cheerleader sidelined on the dance floor at a prom, in favour of a member of the class of, well, 1992.

Alfa Romeo, Italian maker of the iconic Spider coupe immortalised by Dustin Hoffman in the classic 1967 film The Graduate, was making its return to US shores after a near 20-year absence.

Thanks to, with a few detours, Lee Iacocca;


Now controlled by Fiat Chrysler, the firm is planning on dipping its toe into the US market once more, with its two-seater 4C sports car - which has been available in Europe since earlier this year.

Sleek and low to the ground, Alfa Romeo's 4C is meant to compete against Porsche's Boxster and Audi's TT. With a mostly carbon fibre shell, it can go from zero to 60 miles per hour in just over four seconds.

If it runs at all, that is.

Posted by Patrick Sullivan at 9:24 AM