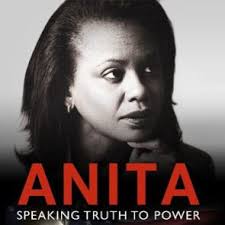 A new book, by Ben Macintyre--A Spy Among Friends--on the curious case of Kim Philby, is reviewed in the Brit press;


[Kim] Philby...betrayed both his friends and his country. Indeed, he betrayed, or spied on, just about everyone of any importance in his life, including his father and his wife. But perhaps his greatest personal betrayal was that of his closest friend Nicholas Elliott.

....Almost everyone who met Philby was won over by his charm. One of the few who held out was the historian, Hugh Trevor-Roper, who recalled, ‘There was something mysterious about him. He never engaged you in serious conversation - it was always irony.’

Which we juxtaposed with the appearance of a new video about someone who also never engages in a serious conversation with cameras rolling (Anita Hill), and has managed to charm most of the world's journalists. Though in this AP article by Jocelyn Noveck about that video, the irony is unintended;


The soft-spoken Hill, who still speaks in the same calm, precise tone many remember from 1991, has for two decades been living a quiet academic life, occasionally venturing out to speak about sexual harassment but often declining interviews.

Which is because, while Ms Hill is not the sharpest knife in the drawer of Convenience Feminism, she knows that interviews are dangerous. Though her testimony in the Clarence Thomas confirmation hearing is years beyond the statute of limitations on perjury.

Someone who isn't beguiled by Anita might ask some timeline questions that can't be answered truthfully without giving up the fact that Clarence Thomas was telling the truth. I.e. the tale spun by Anita, and her witless friend Susan Hoerchner--Yale Law grad and unemployment compensation judge--was false. Especially since, while Ms. Hill was working for Thomas, Hoerchner was long gone from Washington DC, living in California.  Any conversation between Hill and Hoerchner about sexual harrassment would have been regarding someone other than Clarence Thomas.

Betrayal is only possible when people who should know the truth are willing to look the other way. For political and/or personal reasons.

Posted by Patrick Sullivan at 10:37 AM