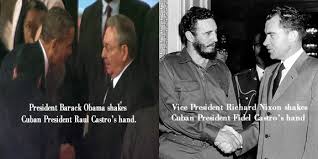 He who fails to remember history....


President Barack Obama on Saturday declared his refusal to refight the Cold War battles while Cuban President Raul Castro rallied to his defense, absolving Obama of fault for the U.S. blockade in a stunning reversal of more than 50 years of animosity between the United States and Cuba.

Ends up surrendering his country's legacy as a bastion of freedom;


"The Cold War has been over for a long time," Obama said. "And I'm not interested in having battles frankly that started before I was born."


On January 28, 2015, speaking in Costa Rica and addressing the III Summit of the Community of Latin American and Caribbean States (CELAC), General [Raul] Castro set his demands. Before the two nations can re-establish normal relations the United States must:

The general declared that “If these problems aren’t resolved, this diplomatic rapprochement wouldn’t make any sense.” And that “It would not be ethical or acceptable to ask Cuba for anything in return… Cuba will not negotiate on these internal matters which are absolutely sovereign.”

Too bad we don't have an actor as President when we need one.

Posted by Patrick Sullivan at 11:52 AM