Did he know the spot price of oil?

Vive Fidel. He lives, he rides in a car, he shakes hands.


Former Cuban President Fidel Castro, 88, appeared in public "full of vitality" for the first time in more than a year on Monday, greeting a delegation of Venezuelans, official media reported on Saturday.

Official media showed images of a seated Castro shaking hands with the visiting Venezuelans through the window of his vehicle, wearing a baseball cap and a windbreaker. 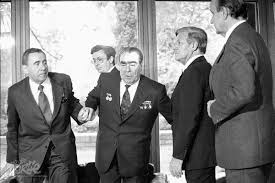 Carrying on the tradition.


Castro impressed the Venezuelans with a firm, long handshake and a lucid mind, the newspaper Juventud Rebelde reported in a writer's first-person account.

Castro relayed "multiple details about life in Venezuela, especially now that this great nation has become the bull's eye for imperial greed," the report said, in apparent reference to U.S. sanctions on Venezuela that declared the South American nation a national security threat.

As opposed to the good ol' days, when it was Cuba that was a national security threat to not only Venezuela, but every other country in South America.
Posted by Patrick Sullivan at 8:38 AM