The richest country in Europe discovers that you can indeed, run out of other people's money. Even for traditionally public goods, so think outside the autobahn;


Germany's roads and highways are crumbling, its waterways and locks falling into disrepair. Much of this country's infrastructure has its structural heyday behind it, yet more patches is not what this leaky pipe needs.

Much will have to be replaced completely.

And financed. So, why not use professionals;


"The liquid bond markets are all but dried up, not least because of the bond purchases of the European Central Bank," said Gerd Weidenfeld, head of corporate finance at Gothaer. "They just don't offer any significant yields anymore."

With that in mind, the folks at Gothaer are increasingly investing their clients' money in infrastructure projects, which according to Weidenfeld offer a long and predictable lifespan and stable cash flow.

And the public gets new stuff to use, and drive on. As even French Communists realized some time ago; 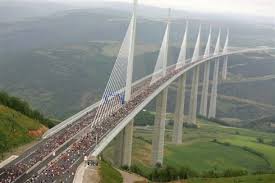 Not to mention the Governor of Indiana, who explained the economics back in 2006 thus;

Without knowing what level of interest to expect, we offered to lease our toll road long-term to any interested operator willing to pay for the privilege. Independent estimates of the road’s net present value in state hands ranged from $1.1 billion to $1.6 billion, the latter figure aggressively presuming that all future politicians, unlike all their predecessors, would raise tolls at least in line with inflation. I had resolved that only a bid far in excess of that range would be worth advocating to my fellow citizens.

Which Indiana gleefully accepted, and used the money to build more highways. Clever, these Hoosiers.
Posted by Patrick Sullivan at 10:49 AM