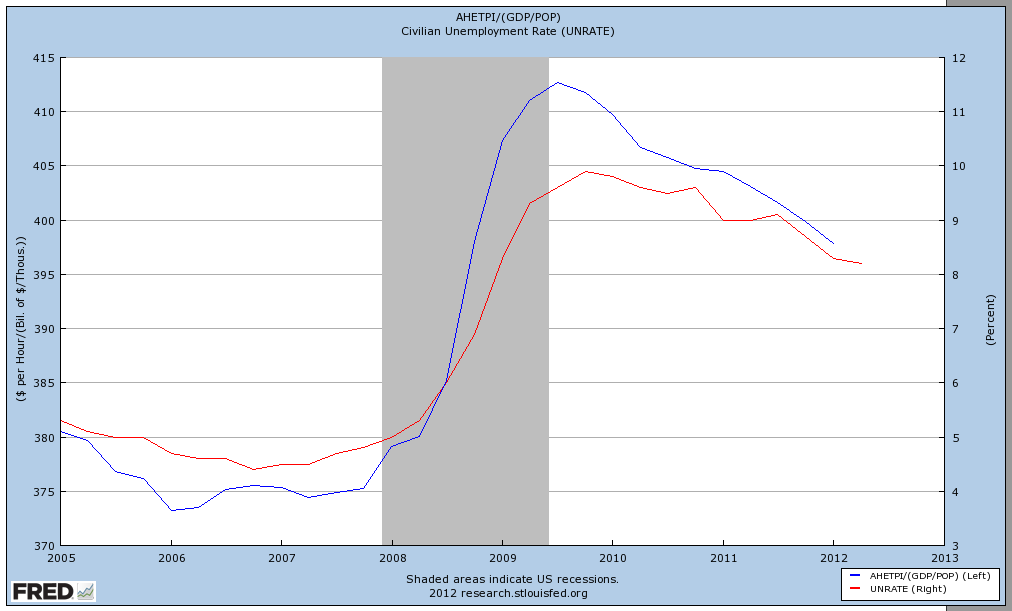 From the indispensable Scott Sumner, all you need to know to understand the current economy is in the above.  The red line is unemployment (right scale).  The blue line is nominal wages divided by nominal GDP.

Both rise very steeply after December 2007.  The reason the blue line goes up is mostly that GDP declines at a faster rate than wages.  I.e., wages are 'sticky', they don't respond quickly to changed labor demand.  The reasons they don't, include long term labor contracts, extended (and high) unemployment benefits, high minimum wages, 'inelastic' benefits packages.

Which reasons are also why the two lines don't descend as steeply (quickly) as they went up.  Eyeballing the graph and extending its slope into the future gives little hope for a 'return to normalcy', such as happened the last time we had a recession of this depth; the early 1980s.

Those, as well as a probably too restrictive monetary policy from the Bernanke Fed.  So, Occupiers, stop throwing rocks;

Police says unknown suspects used rocks to smash two large windows and the front doors of a bank in northeast Seattle on Sandpoint Way NE at about 1:30 a.m.

At 3:00 a.m., unknown suspects also smashed at least nine windows at another Wells Fargo in the Madison Park neighborhood. A police dog couldn't pick up a track.

KING-TV reports anarchy graffiti was left on the door of one bank.

Wells Fargo branches in Seattle have been a target of vandals this year. The Madison Park branch and a downtown branch were vandalized in January. Three other banks were damaged by masked vandals in February in the Capitol Hill neighborhood.

Posted by Patrick Sullivan at 9:47 AM